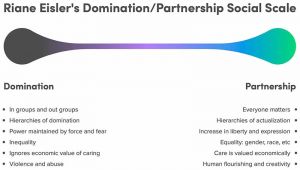 Partnerism is an economic and social system based on caring and nature, with an emphasis on a social system based on equality of women and men. It is a direct alternative to domination culture, an economic and social system ruled or dominated by men. Unlike Capitalism and Socialism, Partnerism recognizes the economic value of care and adequately rewards it in both the market and non-market sectors. Partnerism was first coined by Riane Eisler in The Real Wealth of Nations and most internationally recognized in The Chalice and the Blade.

Riane Eisler’s research reveals four interactive levers for shifting away from domination systems toward Partnership Systems. Eisler’s scholarship directs us to focus our efforts in these four areas as foundational to build Partnership Systems. In a hierarchy of domination, accountability, mutual respect/ mutual benefitonly flow from the bottom up. In a Hierarchy of Actualization, they flow both ways. And that’s a huge difference.

Partnerism values the work of caring.
Neuroscience shows that what children experience and observe, starting at birth, determines how our brains develop and therefore how we think, feel, and act. Infants and children absorb partnership or domination worldview's from parents' relationships with each other and from their relationships with parents and siblings, long before they go to school and long before critical mental faculties are developed.

Partnerism values all people, regardless of gender or other differences.
How a society constructs gender roles and relations not only affects everyone’s individual life options; it affects families, education, religion, politics, and economics. When people learn to equate the physical differences between male and female with superiority or inferiority, dominating or being dominated, being served or serving, they internalize a template that can automatically be applied elsewhere: race, religion, ethnic, sexual orientation, etc..

Partnerism supports empathetic, mutually beneficial, caring relationships.
We need the language of partnership systems to transcend old categories and to describe beneficial social and economic systems. A caring democracy requires accurate narratives about 'human nature'. This will require a concerted effort in which the arts, music, literature, and education are informed and inspired by science and caring values.

The Partnerism economic model includes the full spectrum of economic relations, from how humans relate to our natural habitat. This requires a complete and accurate map that includes all economic sectors with the household as the core inner sector. In the dominator economy, the foundational economic sectors, household, unpaid community, and natural are N/A (not applicable), omitted.

SWEIs inform us that environmental work and care work, which is the work of caring for others, such as children or the sick and disabled or the elderly, yields significant economic value. Learn more here.

Human Capacity Indicators (HCIs) measure the output dimension, i.e., the degree of human capacity development, where human capacity is understood to refer to the capacities that people learn to utilize not only in service of their own advancement but also in collaboration with others for the advancement of the society and economy in which they live. They are divided into seven subcategories:

Care Investment Indicators (CIIs) measure inputs into the creation of human capacity, i.e., the extent of government and business support for care work, in the form of budgetary allocations, family-friendly laws and workplace practices, and so on. They are divided into four subcategories:

In the prehistory of humans, partnership used to be the norm. In both the Paleolithic and Neolithic periods, there are examples of matriarchal societies preceding patriarchies. British archaeologist James Mellaart, for example, reported a Neolithic site with many female images and no signs of destructive warfare for almost 1000 years. For thousands of years, people lived in these peaceful partnership societies, until warlike nomadic tribes disrupted the balance with their dominator cultures (5000 B.C.E., 3000 B.C.E.).

In the Neolithic or first agrarian cultures going back about 10,000 years, we first see a profusion of female images, and, reflecting a massive cultural shift, their disappearance toward its end. We see the first signs of domination culture stemming from nomadic culture around 5000 B.C.E., and becoming widespread by 3000 B.C.E.

The Minoan civilization on the Mediterranean island of Crete was a high civilization: a technologically, artistically, economically, and socially developed, centralized society, that flourished under a partnership-oriented system, with art, governance, economy and architecture that revered women and nature. It was one of the last remaining large-scale partnership civilizations in the world until domination culture replaced it.

The economic policy goal of Parnerism is in developing the human capabilities of each person, not the level of monetary income per person. 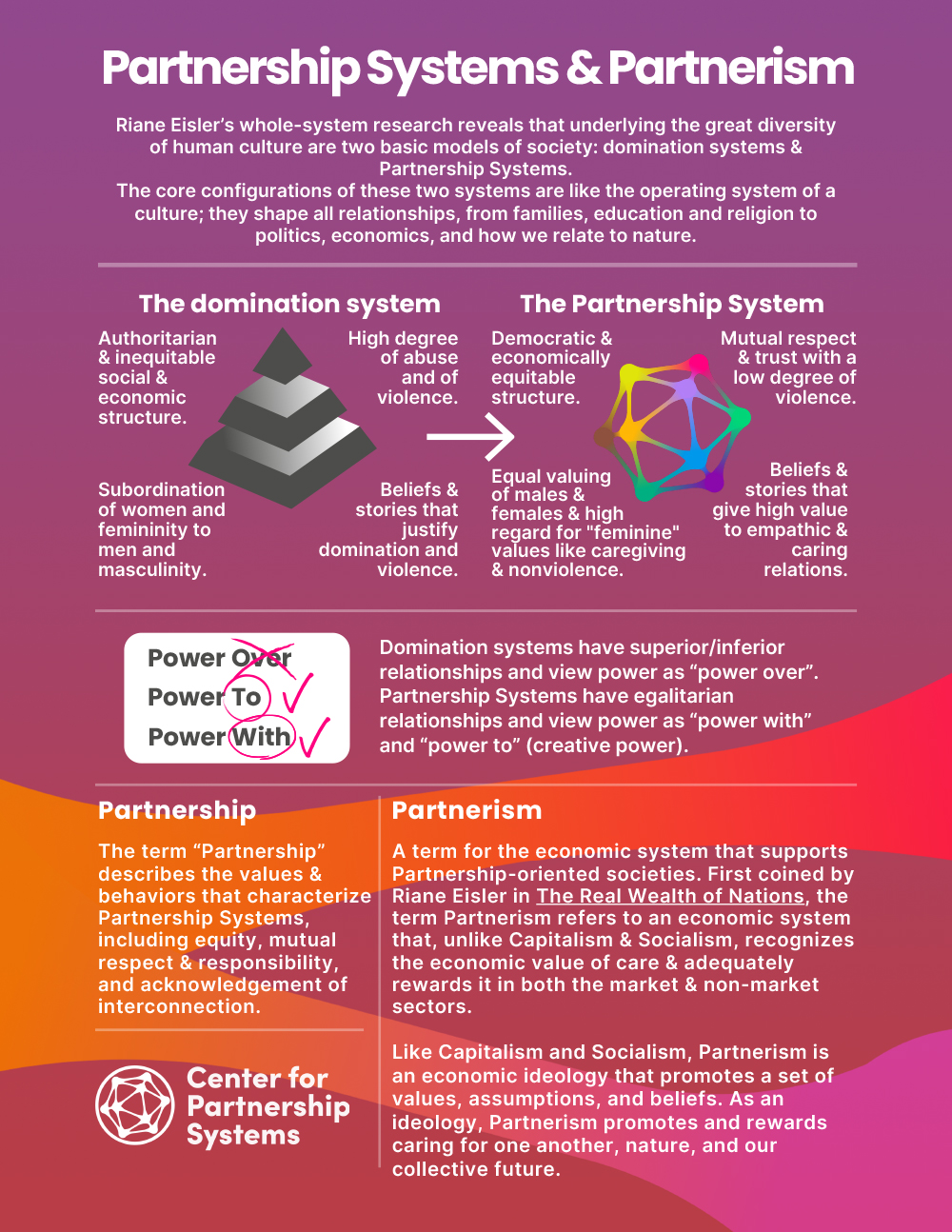 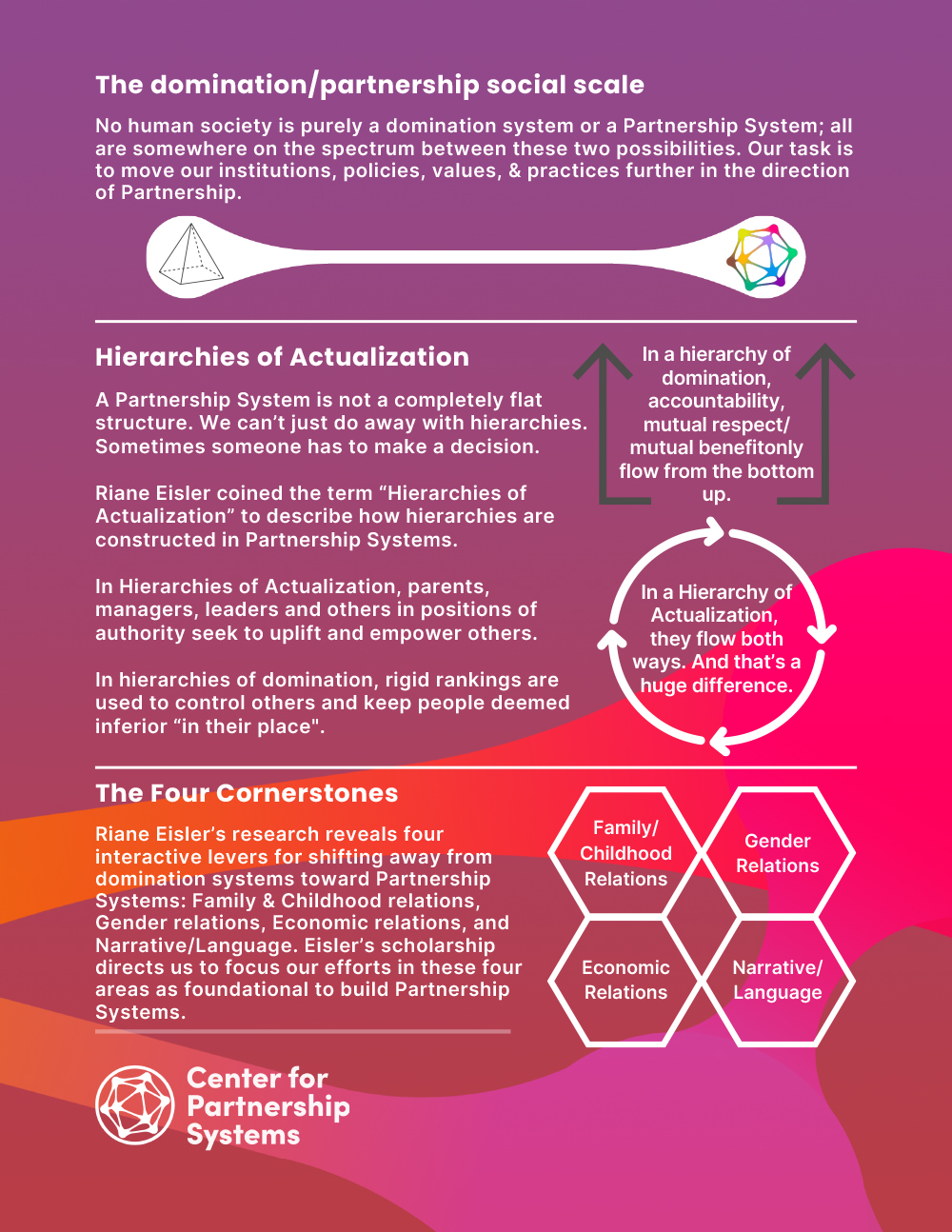 Caring, caregiving in Partnerism are defined as activities guided by a caring orientation over a longer time horizon. It not only fulfills human needs and aspirations, it also offers a wholly different approach to business and government policies that are both financially and socially profitable. A caring orientation includes giving visibility and value to:

A caring orientation is also distinguished by a longer time horizon, taking into account short-term and long-term considerations.